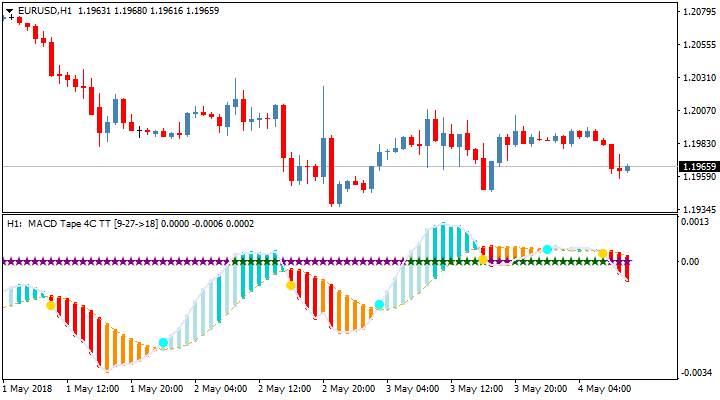 MACD indicator (Moving Average Convergence/Divergence) in trading – description and application, how to use, trading strategy. The MACD indicator (Makdi) is one popular oscillator, which in 2022 is included in the standard package of indicators of any terminal. The indicator, as the name implies, is based on the convergence and divergence of Moving Averages, it was invented by the famous trader Gerald Appel. 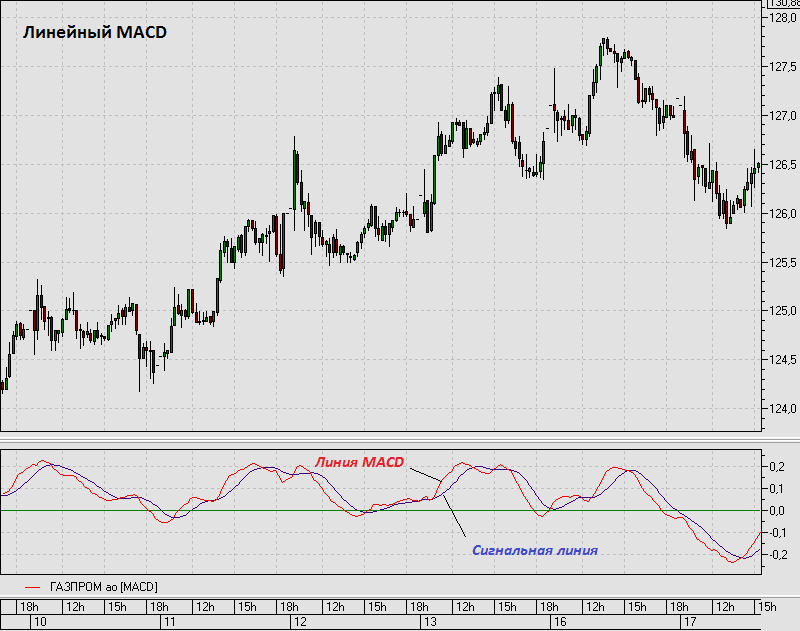 Linear Macdi is calculated as the difference of two exponential moving averages – default 12 and 26, to smooth the result one more default moving average, for example, period 9 – signal line is added. In the indicator parameters, you specify the periods of moving averages and at what prices you need to build (closing, opening, minimum, maximum, medial). MACD can take both negative and positive values. It is believed that long is preferable when the MACD is above zero, finding the MACD lines below zero indicates a downtrend. There is also a histogram on the indicator chart, which is the difference between the moving averages – the MACD line and the signal line. Depending on the strength of the trend, the difference may increase, decrease, or remain unchanged. MACD, like many indicators, works best on large timeframes, parameters were selected based on trading on daily charts. A trader for intraday trading must select parameters independently for each instrument. 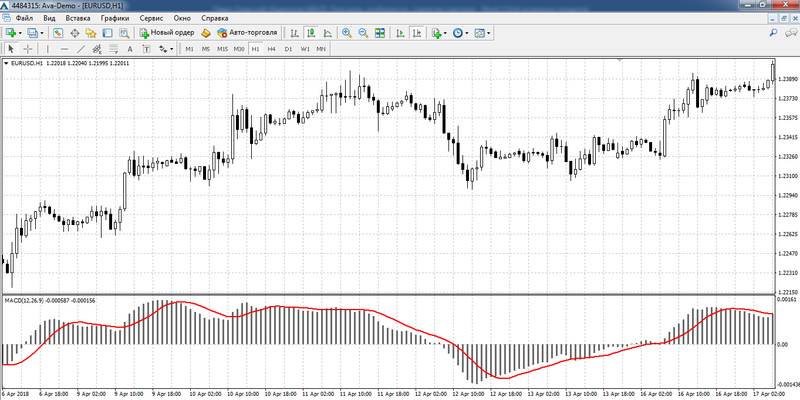 The principle of the indicator is simple – it shows the ratio of the short-term period relative to the long-term one. With it, you can determine the strength of the trend. If the trend starts to accelerate, the indicator draws higher and higher bars, the indicator line deviates more from the signal line. A trend is considered stable if the histograms are high and of the same color. If the colors of the histogram quickly change each other, there is uncertainty in the market. When the trend slows down, the bars begin to decrease, and the Macdi lines converge. This indicates a period of consolidation or a likely reversal. By default, the periods of moving averages are 12-26, and the signal line has a period of 9.

A trader can experiment with these values, adjusting them to the instrument and timeframe, but keep in mind that the period of the fast moving average should be half that of the slow one.

The MACD indicator gives several types of signals, a trader can predict the price movement using a histogram or indicator lines:

The strongest MACD histogram signal is a divergence that occurs at the end of a trend when the market is about to reverse. This signal is not easy to notice for beginners; it is used by experienced traders. The price continues to make new extremes, but the histogram of the indicator does not. There are situations when divergence breaks down. The next price extremum coincides with the histogram extremums, although before that the indicator could not set a new peak. Therefore, it is very important to set a protective stop loss. A bearish divergence occurs on an uptrend and a bullish divergence occurs on a downtrend.

When the signal line crosses the main one from top to bottom, traders predict an imminent decline in quotes. And vice versa, they buy when crossing from the bottom up. On small timeframes, you can find many signals for the intersection of the indicator lines, but most of them are false. It is worth paying attention to the signals on the daily and weekly charts. The histogram of the indicator is used as a filter – purchases are made only when it is above zero, and sales are made when it is below zero. You need the coincidence of two conditions – the intersection of the lines and the histogram in the required position.

Application of the MACD indicator in practice

The indicator performs well when working in channels, you can catch movements from resistance to support and back in overbought and oversold areas. But do not forget that with a strong trend, the price does not notice levels and repurchase / resale. Macdi shows the beginning and end of a trend. Shows points of acceleration and deceleration of the trend. Effective in a volatile market, during periods of small price fluctuations, a trader will catch a lot of stop losses. First of all, the indicator was created to catch trend movements. In a wide flat on the daily chart, it can give good signals on the hourly.

The indicator consists of lines and a histogram. Some traders do not pay attention to the MACD lines, they attach importance only to the histogram. To remove the excess, we came up with a kind of MACD histogram indicator. It consists only of a histogram. In the classic form, the histogram and MACD are in the same window (for example, in the Metatrader terminal). In some terminals (such as
Quik ), the histogram and lines are separated into separate windows. The indicator can be built using exponential, simple, volume-weighted moving averages. In some terminals this is implemented as a parameter (Metatrader), in others there is a special name for each type (MACD Simple, MACD Weighed, MACD). for example, in the FinamTrade terminal. How to trade with the MACD indicator: https://youtu.be/0nihqQyGvOo

The indicator is included in the basic set of any modern terminal. It is present even in the broker’s mobile applications. To enable it, you need to go to the indicators menu and find MACD or MACD-Histogram.

To display the indicator on the chart in the Quick terminal, you need to click Paste. The Add Graph dialog box will be displayed. In it, select MACD or MACD histogram and click the Add button. To change the indicator parameters, go to the Properties tab.

MACD in the Metatrader terminal

How to set up the MACD indicator

By default, the indicator has the following settings:

By changing the periods of moving averages, you can change the speed of the indicator’s reaction to price changes. On small periods there will be more signals. You can either increase or decrease the period of the moving averages. With an increase in the period, the quality of the signals will increase, there will be fewer of them, but the profit/false ratio will be higher. But sometimes the indicator will not see the beginning of a trend. By decreasing the parameters, you can achieve an increase in sensitivity. It is important not to miss the moment of the “golden mean”, between the number of signals and their quality. 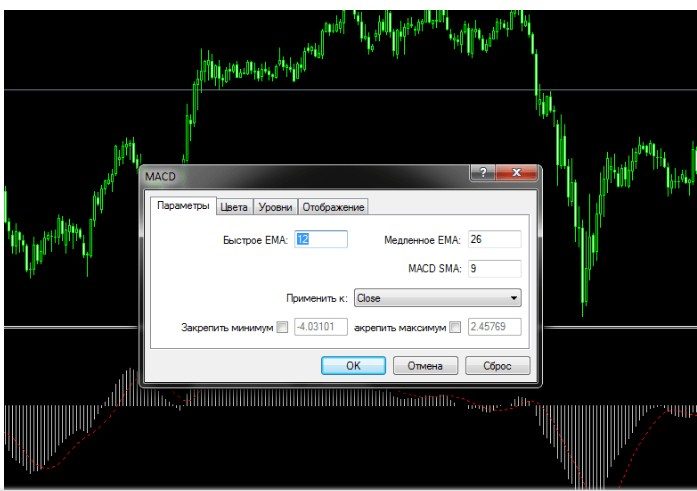 Trading strategies based on the MACD indicator

Depending on the strategy, the Makdi indicator is used as part of a set of indicators or separately.

Some traders use several oscillators at the same time. Transactions are concluded with a pronounced trend (all indicators give the same signals) or in the zone of critical overbought or oversold for a rebound. Traders use
the RSI indicator , stochastics, Bill Williams’ wonderful oscillator (AO),
moving averages together with Macd . Additionally, it strengthens the signal if a Price Action pattern occurs in the buy or sell area.

Trades are opened only when the MACD is below or above zero (to sell or buy, respectively). Additionally, they use filters – trend, other oscillators, moving averages. A short trade is concluded only when the trend is confirmed – support / resistance is lost, there are graphic patterns for confirmation, indicator readings indicate strong sales / purchases. When levels are broken, if the indicator does not indicate a trend slowdown, the trader strengthens positions and moves the stop behind the market.

A strong signal is a divergence between the price and the indicator. This may indicate the end of a long-term trend. Such signals should be looked at on large timeframes – daily or weekly. The price reversal rarely happens in one day, more often they give you the opportunity to enter with a clear stop, no more than 5% of the asset movement. 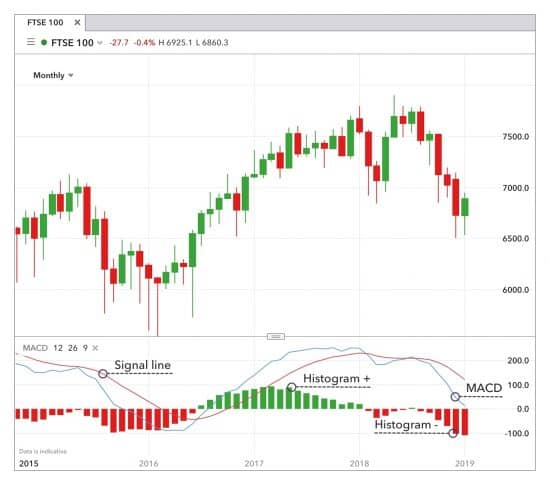 The Macd indicator gives accurate signals on the m1 chart in combination with RSI and AO. For trading, you should choose volatile assets, it is recommended to trade 2-3 hours a day during the American session. A trade is opened when one of the indicators is in divergence and the other two are overbought/oversold. Stop is set no more than 0.1% of the asset price movement, and take profit is either fixed or on a higher timeframe. Stop must be placed before a reversal, there can be up to 4 – 5 false extremes, then the divergence can be broken. If the stop is hit but the divergence is not broken, traders are looking for a new entry. When the indicator reaches zero, the divergence is considered discharged.

A trader watches several (usually three) periods. For long-term trading it is 1h, daily and weekly, for intraday it is 15-1h-4h, for scalping it is 1-m15-1h. On the oldest period, a long-term trend is tracked. The current trend is determined on the average. We are looking for the entry on the smallest period. To enter long:

The stop is set for the lower period, and the take is for the middle one. In the case of a short, the indications are similar. If all three readings are unidirectional, we do not trade.

Advantages and disadvantages of the MACD indicator

The indicator is included in most trading strategies based both on channel trading (overbought and oversold areas) and swing trading. Advantages of the MACD indicator:

Disadvantages of the MACD indicator:

How to work with the MACD indicator – a teaching lesson on trading: https://youtu.be/iuFQxnCuz9w In 2022, the Internet is full of offers of “super profitable” indicators. As a result, the chart resembles a festive tree of various indicators. With such a variety, some have forgotten about the usual standard indicators. And they have not lost their relevance. The very principle of oscillators is the same, you can come up with a little something new. Currently, the MACD has improved versions, but the indicator itself is also successfully used in trading strategies. Understanding how it works is the key to effective trading. MACD is a universal indicator, you can track the strength of the trend and find reversal points in overbought and oversold areas. It will be useful for beginners, MACD is a trend indicator and will not allow you to get up against a strong trend.