Figures and indicators are the main assistants for a trader in predicting the direction of price movement. And if indicators tend to be late with readings, then the figures most accurately work out their purpose. The article provides a detailed analysis of what a “flag” figure is, its formation rules and varieties of manifestations on the graph. Additionally, the main differences from related figures, several trading strategies, and risk accounting rules are described. 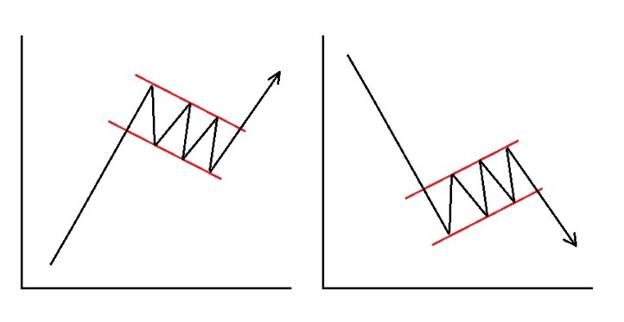 Figure “Flag” – description and meaning of the pattern in trading

The flag is one of the elements of the formation of the continuation of the trend direction. The main distinguishing features of the pattern are: 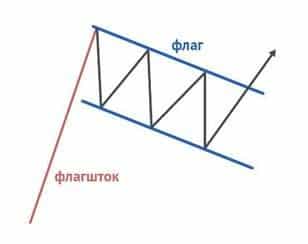 The flag is a volume accumulation figure. It is formed after sharp, large jumps in the direction of the trend.

Determining the flag pattern on the chart is quite simple. The main thing is to accurately select the movement preceding the figure, followed by a slowdown:

After several formations of lows and highs, the price breaks the flag and continues the trend direction. This happens due to the appearance on the market of new and sufficiently large price volumes.

The constituent elements of the figure “flag”

The flag shape consists of the following elements: 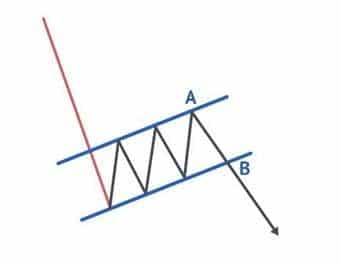 Also, impulse breakouts are often formed inside the pattern. They are single shadows that break through support and resistance. There are shadows as a result of price jumps, in order to knock out part of the bidders on stop orders.

Types of flag figures – bearish, bullish and other patterns

There are two main types of flag pattern: 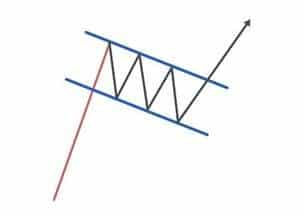 Such a struggle between sellers and buyers, in this figure, is explained by the desire of market participants to take the most advantageous positions before the trend continues. Let’s see how this happens next.

Bullish flag in a downtrend

The bullish flag pattern, in a downtrend, is formed at the expense of buyers, but under the influence of sellers. The figure is formed as follows: 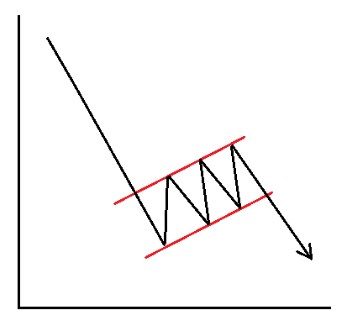 Breakdown of support and continuation of the downtrend occur at the moment:

All this time, shadows appear in the area of ​​support and resistance, which break through the established levels. The concentration of such shadows increases in the support area, indicating an imminent breakout.

Bear flag in an uptrend

In an uptrend, the flag appearance logic is reversed: 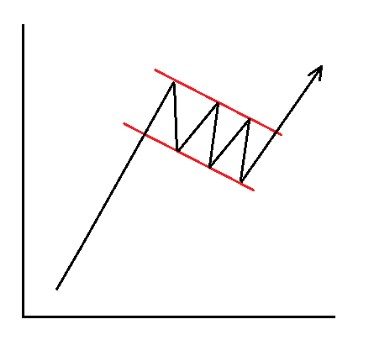 This happens until the bulls get the lowest cost and the necessary volume to continue the trend. The main logic behind the formation of both types of pattern is that market participants are trying to continue the trend from the most favorable price positions. This fact is indicated by an equidistant range between support and resistance.

The main differences between the flag and other patterns in trading

Various figures are used in the technical analysis of the markets. In this case, it is worth considering their orientation and formation geometry. From such figures as:
triangle , wedge and pennant, the flag differs primarily in the symmetry of the range. Its support and resistance lines are equidistant from each other, not narrowing in the direction of price movement.

The situation is quite different with the shapes: rectangle, channel and vertex.

Practical application of the flag pattern in trading

Next, 3 main strategies based on the flag pattern will be considered. The strategies are described on the example of a bearish formation in an uptrend.

This trading method will allow you to find a new price point to open a trade. The strategy also provides an opportunity to buy additional volume by opening a position at a lower level: 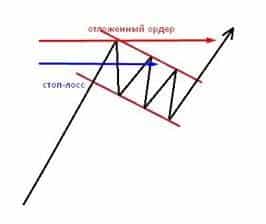 The logic of the strategy is to enter a trade to continue the uptrend. This position of a pending order contains a low level of risk and does not require constant monitoring of the price movement. If, after the third touch of the resistance level, the price has not broken through the figure, the pending order can be moved to the level of the second resistance point, and the stop loss can be set at the center of the second touch range.

This trading method allows you to enter the market from the lowest price point in the flag’s range. The advantage of the strategy is that it can be supplemented with
Fibonacci levels .

After opening a trade, it is necessary to control the formation of the next resistance level. If it is formed, it is required to take profit in order to open the next transaction. The strategy allows you to trade inside the pattern and find the most profitable position for long-term holding of the transaction in the event of a breakdown of resistance.

This strategy is similar to the first one, but differs in that the deal is made manually, without a pending order.

This technique allows you to reduce risks and open a position with a quick impulse breakdown of the formation. 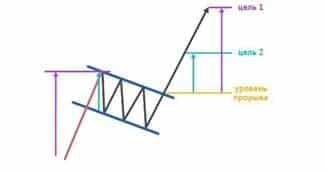 Using the flag formation in technical analysis has its advantages and disadvantages. Among the advantages can be identified:

The figure also has flaws.

Despite the shortcomings, the flag significantly reduces trading risks, allows the trader to assess the situation and determine the priority of market participants.

When trading inside the formed flag and at the time of the breakdown, the trader should consider:

There is a lot of risk in trading this formation if it is formed on a higher time frame and traded on a lower time frame. For example, in an uptrend and a bear flag on the hourly chart, this formation forms a long downtrend over a five-minute time frame. Trading on the 5-minute timeframe, downward, becomes as risky as possible due to a sudden reversal (breakdown of resistance at H1). The flag pattern – a complete guide to trading the flag pattern: https://youtu.be/ER5tCzKbPrI

The flag figure is actively used by traders to make deals in the direction of the trend continuation. This formation allows you to reduce risks and make the most accurate deal. Another reason for using it is the fact that when an important level is formed in the area, the formation indicates its breakdown. This saves market participants from transactions for a trend reversal. The flag formation is useful in technical analysis. For beginners, it allows you to more accurately determine the priority and strength in the market, increase their experience and statistics of successful transactions. When trading in the range of this figure, the main thing is to follow the rules of risk management and wait for the exact location of the touch points.