Pennant figure in trading: how it looks on the chart, trading strategies

Pennant in trading in technical analysis – what it is, how it looks on the chart, trading strategies. 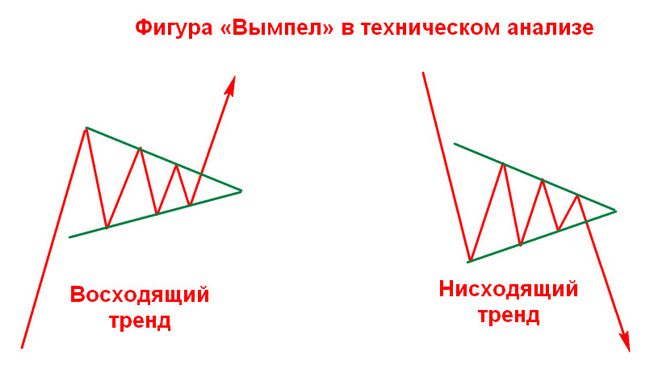 The ability to recognize technical patterns before a global price move is one of the most important aspects of intraday
trading . Obviously, it is impossible to predict the market with perfect accuracy, but if you trade long enough, you will be able to catch various
patterns that serve as an obvious signal of the upcoming global price movement. Head and shoulders, cup and pen, and pennants are some of the most common patterns that traders use to identify up or down price trends. So, let’s proceed to a more detailed consideration of this topic. 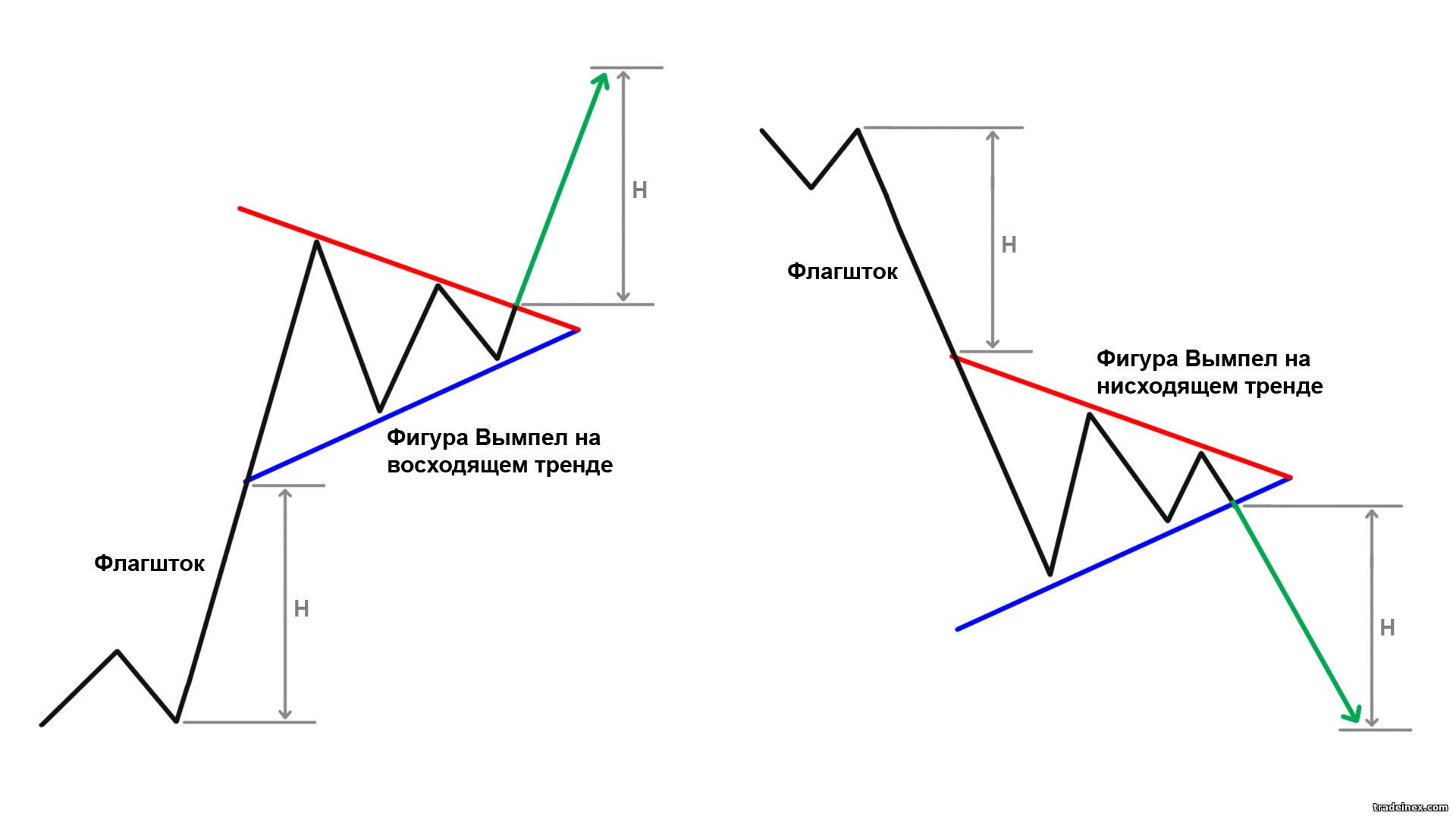 What kind of pennant figure, description

A pennant is a special type of chart continuation pattern. Pennants are similar to flag chart patterns in that they have converging lines throughout the consolidation period. It represents a certain pattern of chart behavior, in which there is a significant movement in stock prices, after which the consolidation phase begins, and then the continuation of the existing trend. Pennant is a well-known pattern that is widely used in technical analysis. This figure is regularly found on the trading charts of almost all currency pairs. Attention! The formation of this chart pattern takes from one to three weeks.

How the Pennant pattern is calculated on the chart

Any chart has the highest predictive value when it exhibits certain characteristics. For continuation patterns such as flags and pennants, the presence of the pattern itself indicates a potentially larger market move in the future. For a pennant to act as a predictor of future price movement, the following market characteristics and elements of price action must be present:

The right time to enter the market is when the price breaks the Pennant line, which forms a triangle in the direction of its main trend relative to the flagpole.

The constituent elements of the pennant figure

Pennants have several integral elements that are present regardless of any conditions. The main elements of the figure:

The pattern on the chart begins with a flagpole in the form of a series of candles that go in the same direction. It could be a trend or simple price momentum. Further close observation of the market immediately after reaching the bottom of the bearish trend (highest point of the bullish trend) allows us to determine the formation of the final part of the pattern – a symmetrical triangle. Note that the pattern is formed relatively quickly. At that moment, when two lines passing through the highs and lows converge quite sharply towards each other, forming a small triangle, we can safely talk about the formation of the Vympel.

Pennants are of two types:

A bullish pattern forms after a sharp rise in stock prices. After a long uptrend, traders try to close their position, assuming a reversal will occur. Prices begin to consolidate as traders begin to exit stocks. But at the same time, when new buyers start buying the stock, it causes prices to break out in the same direction as the previous uptrend.

The pattern is formed after a sharp drop in stock prices. After a long downtrend, traders try to close their sell positions, assuming a reversal will occur. Prices begin to consolidate as traders begin to exit stocks. At this time, new sellers start to sell the stock, causing prices to break out in the same direction as during the previous downtrend. 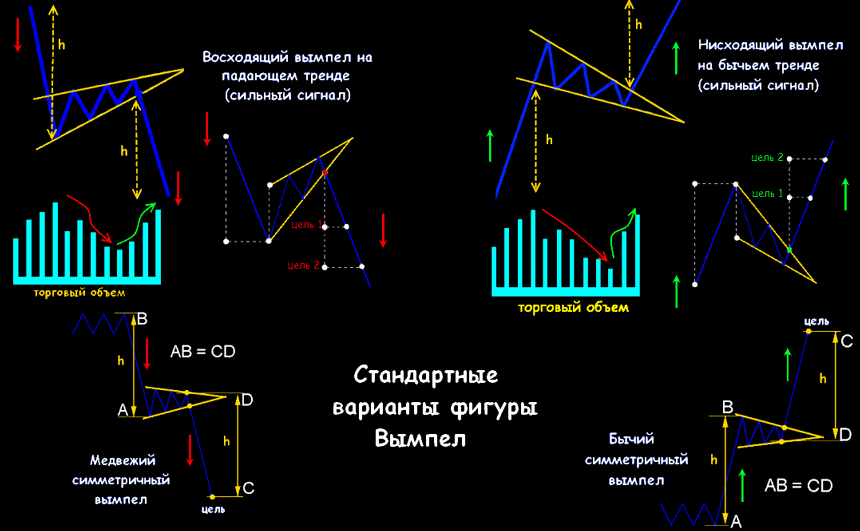 Difference from the flag and adjacent figures

The pennant pattern is identical to the flag pattern, the only difference being that the consolidation phase of the pennant pattern is characterized by converging trendlines rather than parallel trendlines. The main difference from other adjacent figures – “Symmetrical Triangle”, “Ascending-Descending Triangle” is the scope and scale. A pennant is a small form in scope and duration, which is preceded by either a sharp price rise or a sharp fall.

How is it used in technical analysis?

When trading using a pattern, you need to consider the following points:

This example is a bearish version of the pennant pattern in the currency market. The chart below shows the price action of the Euro-Yen currency pair based on the 480-minute timeframe.

Starting on the left side of the chart, we see a sharp down move that forms a flagpole. Notice how large the percentage of red bearish candles is compared to green bullish candles. This indicates a strong impulsive price movement. You can see that the pennant formation has been delineated by two converging trend lines. In addition, a 50% Fibonacci retracement chart of the Flagpole was plotted. If you take a closer look, you will see that as the pennant formed, its extreme swing high moved just below the 50% retracement level before returning to the downside. The second test of the 50% retracement level occurred some time later, but was again rejected from that level. Thus, the filter based on Fibonacci has been worked out. Trend continuation patterns – pennant, triangle, flag and wedge: https://youtu. be/Ox4jLzrrjIY The entry trigger will be a break and close below the support line of the pattern. Note that the entry was just below the support level. When the entry trigger is a significant distance from the breakout point, it makes sense to wait for a possible pullback in order to make a better trade. However, the risk is that there is no guarantee that the price will return. In this case, it is necessary to open a Short position after the breakdown is closed (on a negative candle, which is circled). The first target (Target 1) was reached some time after the entry. It represents the price value equal to 50% of the flagpole length from the breakout point. And the second target (Target 2) is set at a price that is equal to 100% of the length of the flagpole measured from the breakout point. Notice how the price hits the second target, 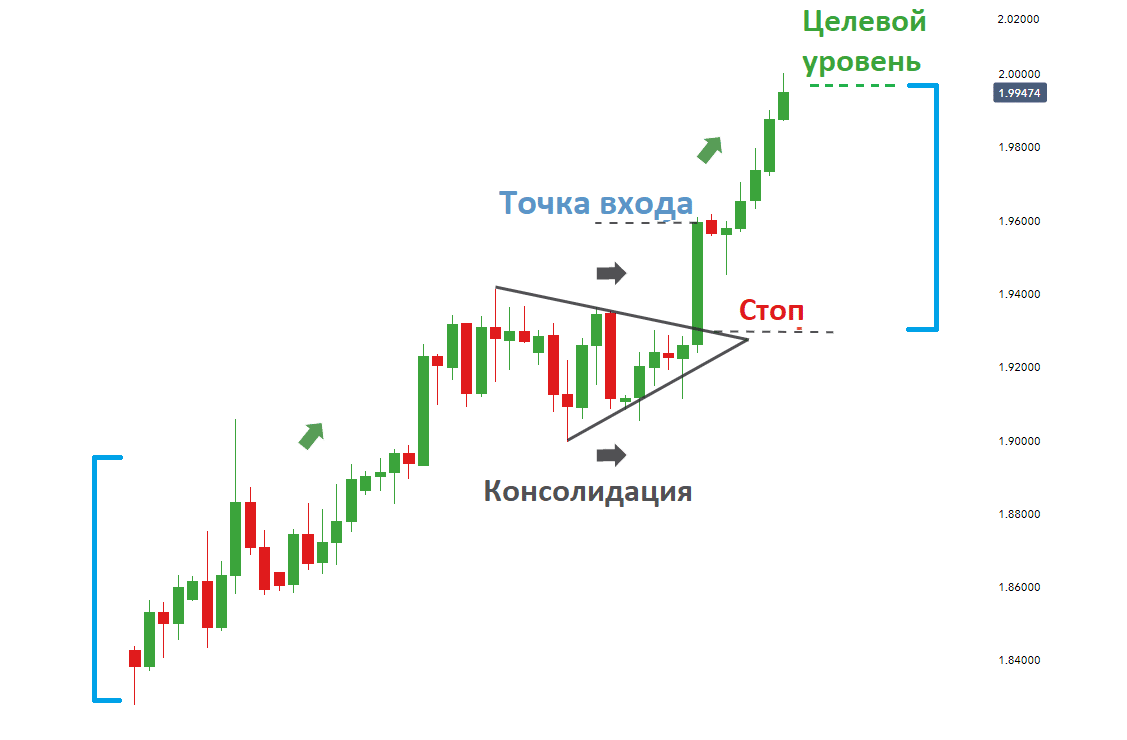 The example below shows the formation of a pattern on the hourly chart of Pfizer Ltd. After an uptrend, prices moved into a consolidation phase, forming a Pennant, and then a breakout began, followed by a continuation of the uptrend. The stop loss level is set at the lowest point of the pattern. The target price for pennants is set by measuring the initial height of the flagpole to the point where the price breaks away from the pennant.

Among the advantages of this figure can be noted:

The most common mistakes among traders are the “traps” they fall into. There is a high level of false positives of the pattern, as shown in the example below:

The example shows that the breakdown did not work, it turned out to be false. The graph curve turned around and rushed up. The pattern didn’t pan out.

According to the “sharks” of trading, for example, Carl Icahn, Julian Robertson, pennants are easily identifiable chart patterns. Numerous studies have shown that continuation patterns are ideal for day trading. Various trading strategies using this pattern are based on the recognition of pennants, most of which have a high chance of making a profit. However, pennant formation can be tricky to recognize in real time, and larger trends and consolidation ranges require significant capital to trade properly. Ultimately, it is up to the trader to decide whether or not to include the use of pennants in the trading plan.