The meaning and practical application of the DEMA indicator

In order to create an effective trading system, it is required with a high probability to determine the moment that is most favorable for entering a trade. For this purpose, the simultaneous fulfillment of two conditions is used:

One of the traditional ways to determine the trend is to use the average values ​​of a certain number of bars (candles on the chart). For example, the growth of the average (SMA) of the last 24 values ​​on an hourly chart shows the direction of the chart change over the last 24 hours. The main disadvantage of this indicator is its lag. Thus, a trader, based on his signals, can easily miss an advantageous moment to enter a deal. Technical analysis tools are constantly evolving and, in particular, this has led to the emergence of a special method for calculating averages – EMA. Its difference lies in the fact that when calculating the average, the values ​​are taken with certain weights, and the latter will have more. Thus, the average will show the presence of a trend, but its lag will be less compared to the usual average.The DEMA indicator is a further development of this idea. In this case, first the EMA is taken from the asset price, and then the EMA is taken from the obtained values ​​again.

DEMA indicator on the QUIK platform [/ caption] The resulting indicator has the minimum lag among similar indicators. An illustration of how different types of averages work.

Thus, DEMA can be used both to determine the trend and to find the most profitable moment of the transaction. This is largely due to its minimal delay.

Double Exponential Moving Average can be used directly, but more often it is used in the following variant:

You can use this average in other ways as well. Using DEMA allows you to determine if there is a trending price change. If the latter is above the indicator, then the trend is upward, if below, then the downward trend. This method allows you to objectively assess the trend, but the trader needs to choose the order of the average used. 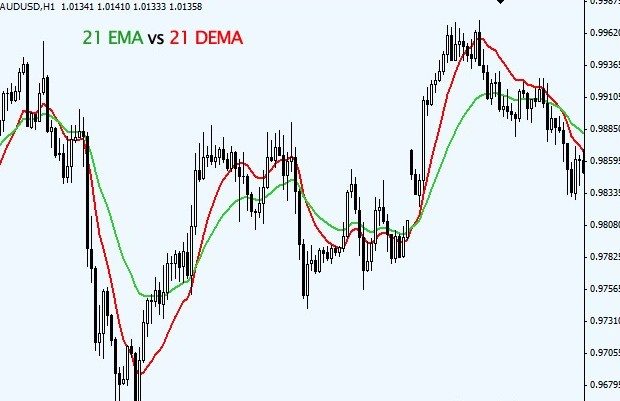 During a trend movement, this average can be considered a dynamic line of resistance (if the price chart is below) or support (if it is below). Such a curve can be used to open a trade on a bounce. The crossing of the dynamic line can also be viewed as a signal to exit a trade opened with a trend. DEMA can be used as a signal to enter a trade. If, for example, the price crosses the indicator from the bottom up, then you can open a deal to buy an asset. You can use a combination of 2 DEMA with different periods. For example, you can choose 21 for short, and 50 for long. The trader should determine the exact value based on the trading strategy he uses. A slower indicator can be used as a way to determine the trend,and the intersection of short and long as a favorable moment for opening a trade.

An example of using averages with different periods [/ caption] When using DEMA, you need to take actions based on a trading strategy. That is, this signal should not be considered in isolation from other rules of the trading system. An example is the following situation. Suppose the price is moving in an upward trend within a channel. If it breaks the lower sloping support line and at the same time the DEMA indicator is triggered in the same direction, then we can assume that the probability of a successful short trade will increase. Example of a deal:

How to use DEMA and how to configure

To use the DEMA indicator, you must select a period for it. It determines the number of the last bars for which it is calculated.

Usually, when working on different time intervals, the trader chooses the number that he considers the most effective. For example, some people think that for hourly charts it is better to take a period of 24. If you plan to use this indicator, keep in mind that it is not one of the standard ones. The installation procedure depends on the terminal you are using. For example, the popular Metatrader 4 application provides for a certain number of custom indicators. You can download DEMA, for example, from the link http://fox-trader.ru/wp-content/uploads/2015/09/DEMA.zip. To use it, you need to take the following steps:

The file downloaded from the link offered here also contains the DEMA MACD indicator. It is installed as it is written here. The use of the indicator is explained in the attached figure. Using DEMA MACD: 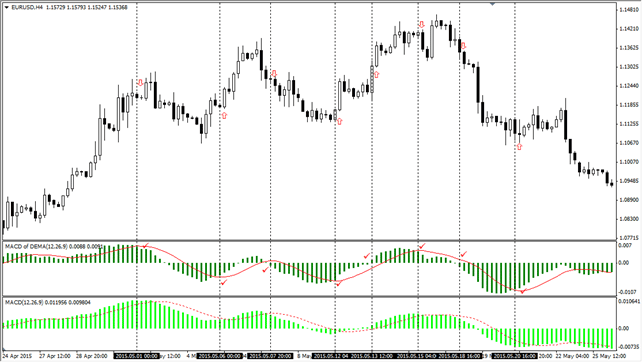 The chart additionally provides a comparison with the classic MACD. It can be seen that the version that uses DEMA gives more accurate signals. Moving average types (SMA, WMA, EMA, DEMA, TEMA): https://youtu.be/2fzwZAScEDc

When using DEMA, the question arises whether it is worth reducing the indicator lag even further by taking the EMA from this indicator again (the indicator obtained in this way is called TEMA). It should be understood that a relatively slower change in the average helps to more accurately determine the direction of the trend change.

If you increase the sensitivity of the average, then it will display the current price changes to a greater extent than the display of the trend. At the same time, the use of the indicator will become more profitable for short-term trading. Compared to a simple or exponential average, the DEMA indicator has less lag and gives more accurate signals.