Technical analysis figures cup with handle and saucer in trading

Patterns “Cup with handle” and “Saucer” on the price charts are formed over a long period and are quite rare. However, they serve as good signals: the first may indicate the continuation of a long-term bullish trend, the second – the upcoming reversal of the bearish trend. 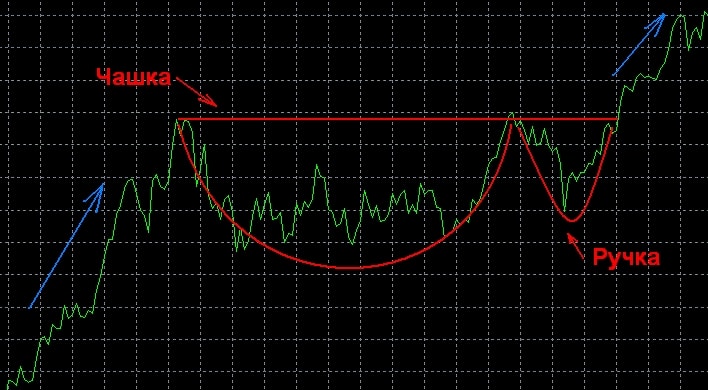 Description of technical analysis charts Cup with handle and Saucer

“Cup with handle” and “Saucer” belong to different groups of patterns: trend and reversal, respectively. As a rule, they are used by experienced investors who are focused on long-term investments.

On short timeframes, such figures are rare and are considered weak signals.

The Cup and Handle price pattern is a U-shaped figure with a small branch (correction) at the right end. This technical analysis figure is considered a bullish signal and is regarded as a sign of the continuation of the uptrend.

Pattern “Cup with handle” in real trading, description and what the model means in technical analysis: https://youtu.be/WB-xPUxdL98

The Saucer pattern signals a possible reversal of the prevailing trend. It is a U-shaped formation that appears at the end of long downtrends and often indicates an imminent price reversal. The time frame of the pattern can vary from a week to several months. At the same time, it is difficult to clearly indicate when the figure was formed. Formally, it is believed that this happens at the moment of overcoming the level at which it began to emerge. 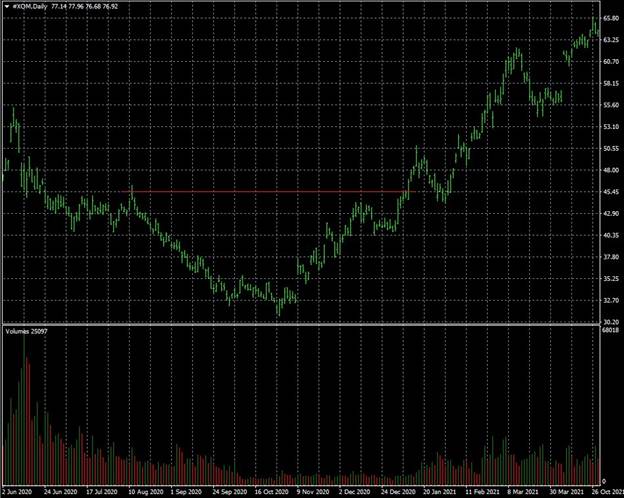 Conditions for the formation of the “Saucer” model:

The described patterns of technical analysis can be viewed inverted, reflecting processes that are opposite to those that are observed in the case of the formation of standard patterns.

An inverted cup and handle is a bearish trend continuation pattern. The formation of the pattern begins with the rise in the value of the asset. Further consolidation is observed, and the price returns to the position at which the growth started. Then there is a small upward correction, after which the chart again rushes down. 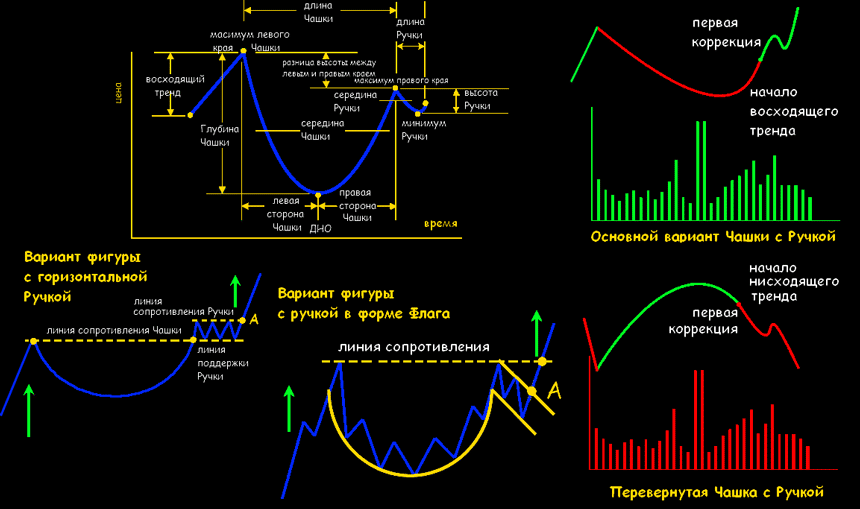 It indicates that the price of the asset has reached a maximum and the uptrend has come to an end. Since the price cannot rise indefinitely, at a certain point it tends to move sideways, then it starts to slowly decrease. After some time, the fall accelerates and a stable “bearish” trend is formed. This pattern does not allow for predictions regarding price performance, but indicates that assets are in danger of an unexpected and rapid fall.

Although the patterns under consideration are considered good signals on large timeframes, their identification requires the study of many indicators at the same time. Otherwise, there is a high probability of making a mistake. It is recommended to use additional tools, including indicators and fundamental analysis.

Trading with the Cup and Handle Model

There are 3 trading methods for the Cup and Handle pattern: 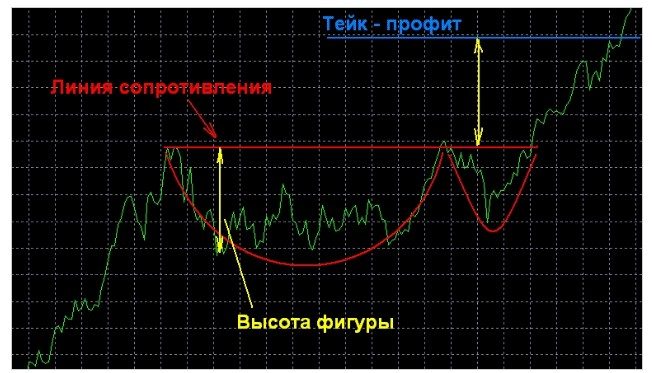 Trading on the cup and handle pattern When analyzing, we should not forget that the “Cup and handle” pattern may turn out to be a false pattern. The following conditions are considered signs of its truth: 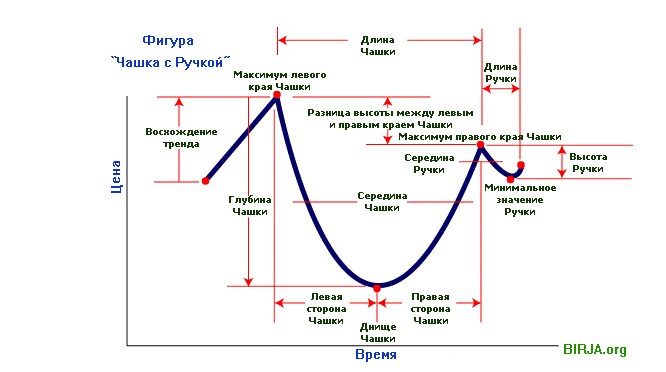 Trading with the Saucer Pattern

Investors waiting for the possibility of opening long positions should watch the dynamics of the saucer bottom. At the time of the first surge in quotes, they continue to observe. A buy is made when a new spike in prices breaks the high of the previous one. Today, the “Saucer” figure is almost never used, because. there is high volatility in world markets. Predicting long-term growth is difficult.