Setting up the Envelopes indicator, how to use “envelopes” in trading

Envelopes indicator – what is the indicator and what is the meaning, calculation formula, application and setting of envelopes in various terminals. In order to succeed in stock trading, a trader must use a certain trading system. This is due to the presence of a high proportion of randomness when quotes change. In order for him to be able to make informed decisions in time, it is necessary to formulate for himself the rules of how to act in almost every possible situation on the stock exchange.

The trader receives a large amount of information for himself, on the basis of which he must make decisions that are beneficial to him to the maximum extent. Despite the obvious complexity of stock trading, the system used should contain recommendations for a relatively small number of factors:

The Envelopes indicator answers all of these questions. At the same time, its logic in most cases is easily understood. Its basis is the use of a
moving average . It allows you to assess the trend in the price of an asset.

Envelopes provides for two more lines, one of which is located above the middle, the other is below. Thus, you can see the band within which the price of the asset spends almost all the time. The use of this method is based on the belief that the price, although it fluctuates, tends to its average value all the time. The calculation formula usually looks like this:

This indicator contains two middle lines with the same period. The traditional option is to use a simple moving average, but other options are usually available in terminals: weighted, exponential or smoothed. General view of the indicator: 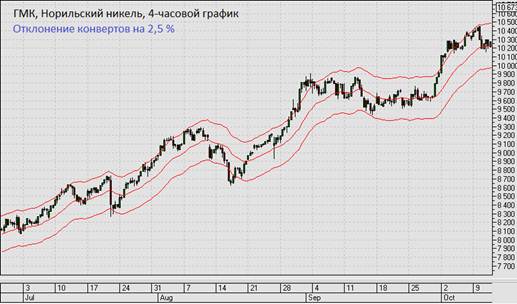 Additionally, a forward or backward shift by a certain number of bars can be specified. You must specify the bandwidth. We are talking about a shift up and down from the average by the same amount. It is determined as a percentage or tenths of a percent of the price. Another parameter is the indication of the values ​​from which the averages are taken. The classic option is the closing price of the bar, but you can also use the maximum, minimum or input values.
Contents

Trading on the Envelopes indicator – how to use “envelopes”

The indicator can be used on different timeframes. In order to determine the nature of the price movement, it is necessary to decide whether there is an uptrend, downtrend or sideways movement. To do this, you can build an indicator with a long average period and look at its slope. Another way to study a trend is to look at envelopes over a longer time range. To select the moment to enter a trade, you can consider a rebound from the boundaries. For example, a short run out of lane and a return back can be considered. As a signal to enter a trade, you can consider the moment when the candle closes for the first time inside the indicator band.

The choice of the direction of the transaction should not contradict the nature of the trend. With lateral fluctuations, transactions in both directions are possible. If the trend is directed, then they act only in accordance with it.

Stop can be placed outside the candle, which served as a signal. The exit can be carried out, for example, when the trend reverses. Often, during a trend, quotes are between the central and one of the extreme lines. A profitable exit can be made when the center line is crossed. In the process of work, the correct setting of the indicator plays an important role. Usually, the parameters are set in accordance with the features of the instrument used. There are no such settings that will provide one hundred percent tuning of the signals. The efficiency of work is determined by the experience and knowledge of the trader.

When setting up, it is important to pay attention to the volatility of the instrument. If this is not given due attention, then many false signals will appear.

In order to reduce the likelihood of receiving false signals, filtering is applied. To do this, other indicators are additionally used in the trading system, which must confirm the received signal. If this does not happen, then the trader does not pay attention to it. If a narrow band is used in the course of work, then during a trend, the signal may be an exit beyond its limits in the desired direction. For confirmation, you can, for example, use the ADX indicator, which can confirm the presence of a trend. The following is an example of using envelopes and ADX together. An example of working with Envelops and ADT:

In this case, a signal to terminate the transaction may be a new hit of the price in the band. In this case, the closing price of the candle can be used as a signal. Experienced traders can work with Envelops for counter trend trading. In this case, on a larger timeframe, the beginning of a countertrend movement is determined, and on a smaller timeframe, the movement is considered in accordance with the rules outlined above. Description and application of the Envelopes technical indicator in practice – how to use “envelopes” in trading: https://youtu.be/Gz10VL01G9Y

When to use Envelopes – on which instruments and vice versa, when not to

Although it can be considered that the use of the Envelopes indicator is universal, in some cases its use can be too risky. The main reason for this is the high volatility of certain markets. In this case, the probability of false positives increases. The issue of application for a particular instrument is decided taking into account the experience and features of the trader’s trading approach. Since Envelops has a lag, it is useful to complement your trading system with an oscillator, such as momentum or some other.

The advantage of the Envelopes indicator is its universal character. It can be used for all the main elements of a trading system or in combination with other indicators. Using an oscillator:

The disadvantage is the lagging nature. It manifests itself because the calculation of averages is used in the processing of information. You can reduce this problem, for example, by using an exponential average or by supplementing your system with oscillators. In the considered example, in this way they check how far the price has deviated from the equilibrium value. In cases where the deviation is insufficiently crossed. Where you can enter a trade, quotes are marked with a circle. Trend trading: 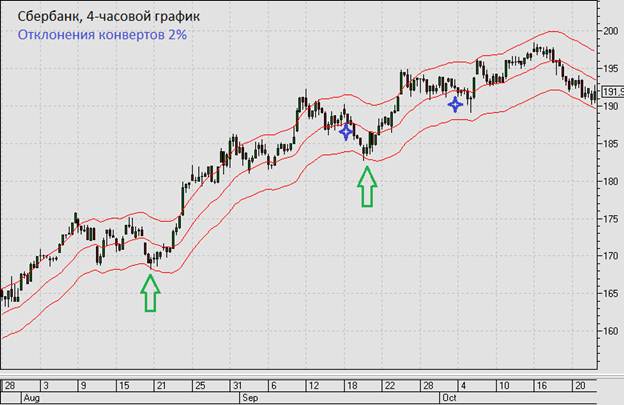 If the band is taken too narrow, or at high volatility, the effectiveness of this indicator will be reduced. Since here the shift up and down is indicated manually, its adaptation to the current instrument and timeframe must be done by the trader, which can sometimes become a source of possible errors.

Setting up the Envelopes indicator in the terminal

In order to use Envelopes, you need to go to the list of available indicators on the terminal you are using. Usually, the one under consideration is one of the preset ones. The choice is made after the desired tool has been previously opened. After launch, a window for selecting options will be displayed. Here you will need to install those that the trader needs. These include: the period and type of the average used to calculate the value of the bars (more often the closing value is used), the shift up and down from the average (usually as a percentage of the price), in some programs a forward or backward shift is also used indicating the number of candles . Entering parameters in Metatrader: 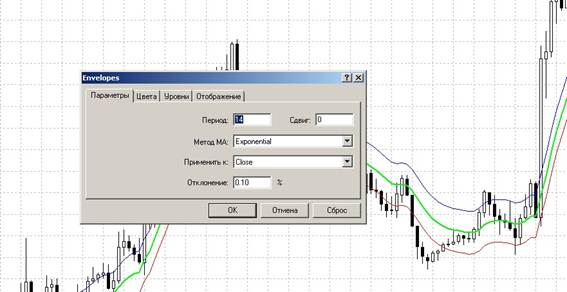 If necessary, you can select the color and thickness of the lines. The graph will show the middle and edges of the band of the envelope.