Using the doji pattern in trading – how it looks on the chart, strategies

Japanese Doji candle (doji) and its use in trading, varieties, trading strategies for the doji star, doji candlestick analysis, what the candle says. Understanding
Japanese candlesticks and reading them correctly on trading charts is an important part of success. In order to conduct profitable transactions, you need to know what a doji pattern is in trading. You need to understand that for successful trading and making a profit, you need to additionally know what types of doji are, how they look on the charts. 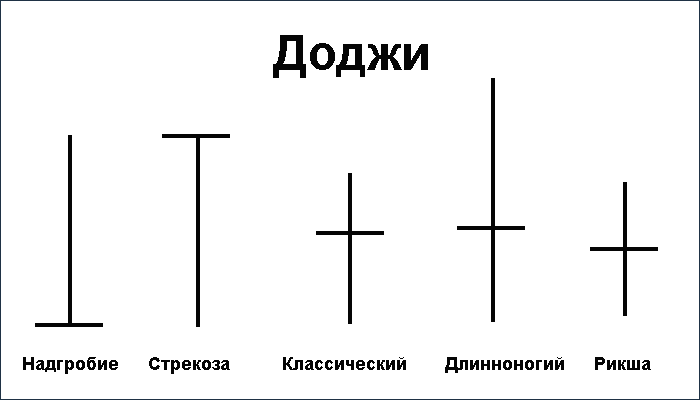 What is doji, a general description of the Japanese candlestick

At its core, doji is a trading candle. In most cases, it indicates that there is a so-called market uncertainty. If you look closely at such candles, you can immediately understand that the opening and closing prices either completely coincide or are very close in value to each other. It turns out that doji in 90% of cases is a reversal candle. A similar trading phenomenon occurs at important support and resistance levels. It should be borne in mind that a candle appears when a bullish or bearish trend comes to an end. In order to avoid mistakes in trading, you must first understand how the Japanese candle works in the market. For the first time, Japan became interested in the analysis of doji candlesticks. In it, the opening price is almost equal to the closing price. It also needs to be taken into account that the candle itself is neutral. Also, such patterns can be present in a number of different important candlestick patterns. If we consider this concept in more detail, it should be noted that each candle is formed when the opening and closing prices of each security are almost equal in value. You need to track indicators for a selected period of time.

The peculiarity is that, depending on where the opening or closing line passes, Dodge can be called “Tombstone”, there are also other names – “Long-legged rickshaw” or “Dragonfly”. Doji – a candle that symbolizes the indecision that exists or occurs during trading in the market. Another point to be taken into account is that dojis in trading are not too significant in the case when the market is not in a trend at that moment. This is because non-trending markets inherently indicate the presence of obvious indecision. Here it should be taken into account that if a doji candlestick is formed in an uptrend or downtrend, this is considered significant in 90% of cases. A similar signal that buyers are losing their previous conviction, as well as in the case when they form in an uptrend. It is also equally a signal that sellers lose their conviction if they are seen on the charts in a downtrend. https://articles.opexflow.com/analysis-methods-and-tools/yaponskie-svechi-v-trajdinge.htm Each doji candle is formed only if the opening and closing prices of each such candle are the same. This tells interested people that the market is in a state of uncertainty. In this case, buyers, as well as sellers, cannot fully control the situation. An example of how this can be seen visually on the chart:

What does a doji pattern look like on a chart? 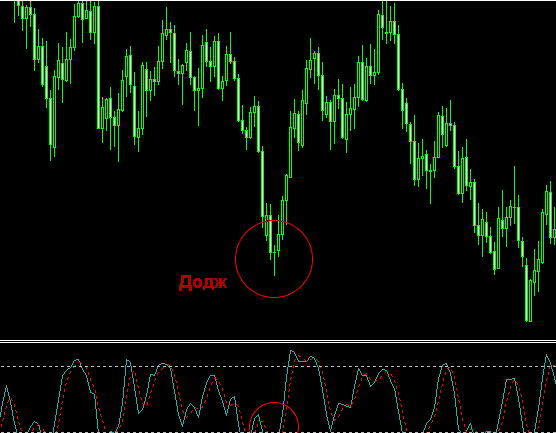 Features that need to be taken into account indicate that, depending on the presence of a lower or upper shadow, as well as on their length, doji has a number of varieties.

Each doji candle in trading is important. This candle has the following varieties:

Each type is recommended to be considered separately. The appearance of a doji candle in the process of trading on the market means that the forces of the “bulls” and “bears” in this case are equal. A special moment – it was during this period of time that the market was in a state of indecision. In the event that a long trend was observed, then the appearance of a doji signals to bidders about its completion and a possible reversal. If the market is active, then the doji will be a strong signal for all its participants. This becomes especially noticeable if it was formed with a gap and has a large tick volume. If the market initially shows low activity, then such an option will be more useless for bidders. Those who have experience with these candlesticks only use them in conjunction with other technical analysis tools. They can be, for example, trend lines or peculiar indicators used in trading. Experienced players point out that the use of dodge with indicators of the following types will be of particular efficiency and profitability: overbought and oversold. The option also shows itself on the positive side when a doji is formed in a similar zone. This is a good signal for a trend reversal to a positive one. Doji can also be part of some candlestick patterns. In this case, the emerging model becomes stronger in the market, and, therefore, significant for all participants in the process.

Any research and analysis in this direction shows that a trend begins to form and further develops when there is a clear difference between supply and demand. This rule applies only to the asset. Here, as an example, consider the case when it comes to an uptrend. It is accompanied by the appearance of the considered candles, which at the same time have a long body. 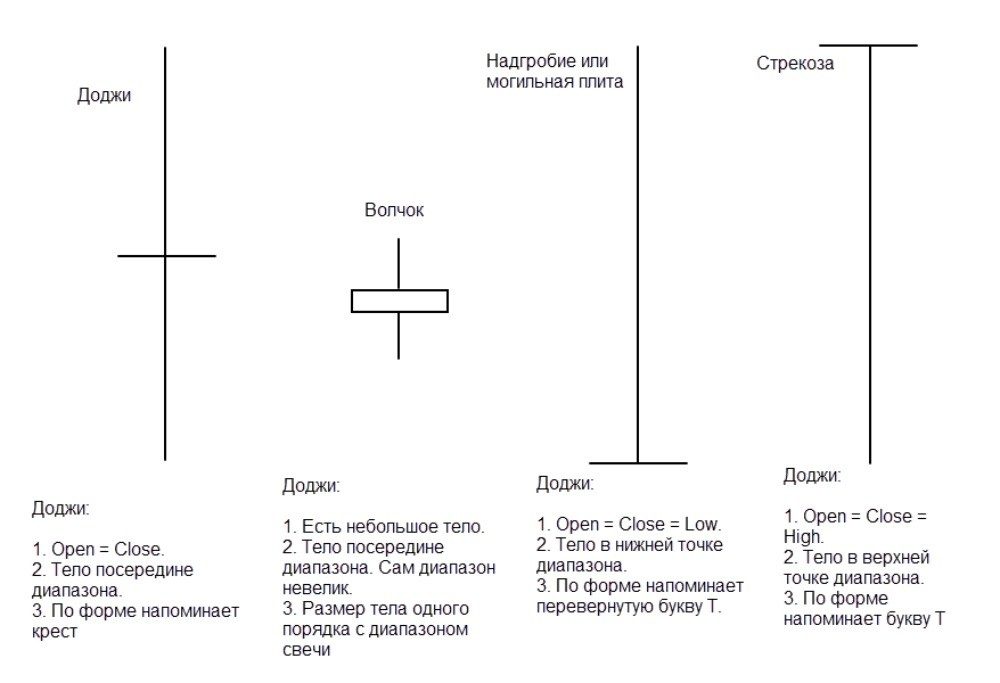 If demand increases, then the value of a particular asset participating in the auction increases. At the same time, you need to monitor all sections of the charts, since in one of them supply and demand must find a balance. It is here that the very candles appear – doji. It should be borne in mind that the short-term balance that has arisen is not yet a full-fledged indicator of the situation in the analysis. The candle indicates that a reversal to demand or supply will occur very soon. It is important to pay attention, first of all, to where such candles appeared in the auction. Thus, the doji candle shows that it is necessary to think about the choice between selling or acquiring an asset, but at the same time it is necessary to analyze the general situation on the market.

How to use, setup, trading strategies

In the case when you have to work with these candles, you need to pay special attention to the areas that precede and follow the pattern. In other words: what the candle is surrounded by. If these are, for example, options with long shadows and a short body, then you should not attach much importance to them in the process of setting up and building a trading strategy. In this case, the market is in the stage of consolidation, in which it will remain for a certain period of time. In the case of the option of being surrounded by candles with a long body, this is a signal for special attention to what is happening. [caption id="attachment_14436" align="aligncenter" width="589"]

Doji pattern with different shadows Consider the doji pattern, the Japanese candlestick in its real display on the chart, what the pattern means and what to do: https:/ /youtu.be/vWOxRBI_zAU

When to use doji and vice versa when not to

Since these candles are an element of technical analysis, they are actively used to find the tops (and bottoms) of the selected trading channel. Any trend begins to form and develop, getting an ascent, so you need to use such candles when there is a tendency to turn to demand or there is a balance for a long time. If there is no clear trend, then candles are not recommended.

The advantages are ease of tracking, ease of analysis, clear visual reflection on the chart, efficiency in work. Disadvantages: different types will be difficult to master for beginners, such candles occur very rarely, they also depend largely on the general situation on the market, without experience it is difficult to understand when to buy a doji on a candle and when to sell it.

Building in popular terminals with screenshots and explanations 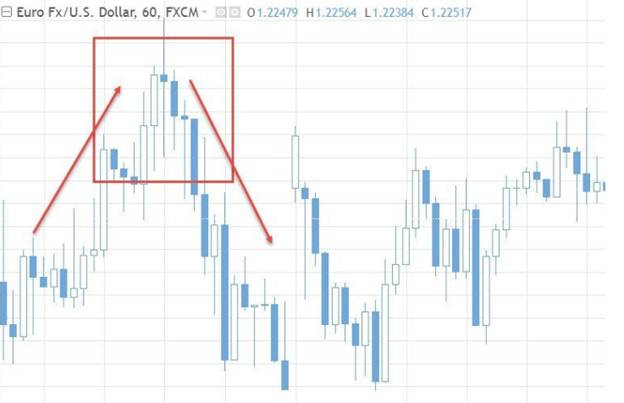 In order to work with these candles, you will need to know which patterns lined up before and after them. For example, if you look at the screenshot, it will become clear that the price is growing in a certain time period. Then a candle appears directly, indicating market uncertainty.

After that, you need to start monitoring the situation. If there is a rebound from the local maximum at the resistance level, then you can open a deal. The reason is that the price will continue to decline to the support level.